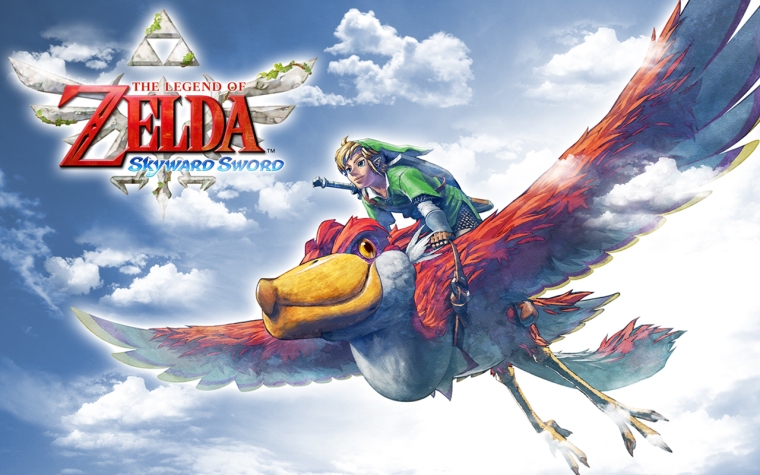 The biggest and maybe last huge Nintendo Wii release is out and I’m here to tell you about it. Aren’t I a hero?

As you might have come to expect, The Legend of Zelda – Skyward Sword starts with Link, our favorite green-clad protagonist, asleep. This time he has a dream, a vision of a terrible, black creature appearing and eating his childhood friend Zelda. When he wakes up he is greeted by a big, blue bird with a letter inside its beak. Both were sent by Zelda to wake him up and remind him that the bird-race he was going to participate in is today. Thanks to the fact that Link rides a rare breed of red bird he is favored to win, but something or should I say somebody locked Link’s companion away, so he has to go look for it or else he wouldn’t have anything to ride on for the race. That is how this adventure starts off and after the race (I’ll leave to your imagination whether or not Link finds his bird and/or wins the race) and the following ceremony, in the middle of the night, Link is led by a blue-ish figure to the hidden temple on the island in the sky Link and Zelda are on. Inside it rests a sword which houses the figure that led us there. Fi is the blue spirit’s name and she explains that Link is the chosen hero meant to save the world from a big evil and that he has to go on a quest to prove himself. Coincidentally (or is it?) Zelda has disappeared and your best chance of finding her is going on said quest. To find her and prove his worth he must travel the world below, the earth. A place the people of his Island and everyone else above the clouds thought inaccessible or destroyed. There he meets Ghirahim, who is also following Zelda, but for less heroic reasons.

This game’s story fluctuates between “really good and engaging” and “oh yeah, this is a Zelda game, so I need to find these 3 things, got it”. It never gets boring or annoying though, neither did it make me feel like things were happening for no reason, so overall it’s a good story that is well told and executed. The characters are awesome and so (logically?) is the writing. Everyone has some neat quirk to them which isn’t exaggerated to a point where it becomes ridiculous but is just weird enough to make them lovable or funny. Everyone has a story to tell, a place to live and some kind of quest to give. It feels like Nintendo tried to make everyone in Skyloft (which is the name of the island) and beyond a personality and I feel like they succeeded. Personal highlights are the item check-girl who I got to fall in love with me because I’m such a smooth operator, the fortune teller who has the prettiest eyes of all and Ghirahim, who is amazing at making you feel uncomfortable. The biggest-jerk-award goes to Beedle, who, with a big smile on his face, drops you several feet onto the ground if you dare not to buy anything after you visit his flying item shop. How could one forget about Groose, who is a jerk and a bully at the beginning but then becomes the most useful badass of all time? Fi, your constant partner and persona of your sword, deserves a special mention as well. She speaks in a very cold, calculated manner and uses numbers to back up everything she says, but from the way her dialogue is written you can very well sniff out some snarkiness in what she has to say from time to time, which had me quietly, pleasantly laughing to myself. Also, she dances around like a ballerina at certain points, which makes everything cool. 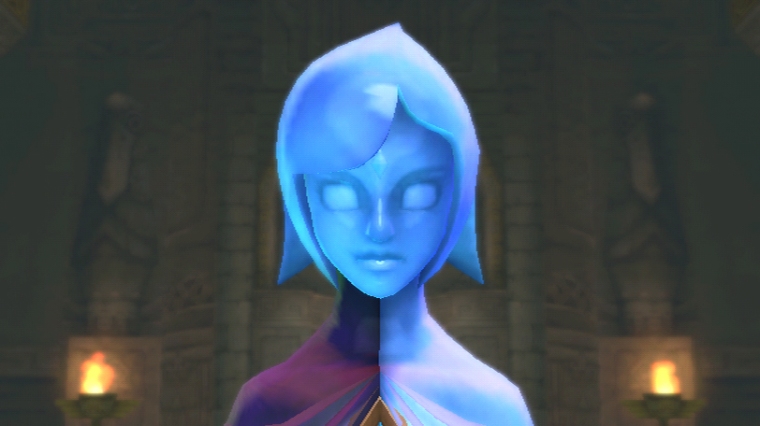 The game is not HD, there are a bunch of edges from generations-past, this is a Wii game, but Skyward Sword manages to look amazing. The art direction is outstanding, everything has its place and characteristic and just looks right. The problem of draw-distance is solved via a filter that makes everything far away look like a painting. There is so much love for detail in pretty much everything, so losing yourself in the world presented to you is very easy. On one of the places you have to visit a couple of times there is a mechanic that changes the area around a certain object dynamically, which creates awesome visual effects and at one point you carry one of those objects on a boat around a desert, which – as you move – changes the sand around you to a sea of water. That moment was the most beautiful, gorgeous visual experience I have.. probably ever had. It had my jaw dropping all the way through to the other side of the planet and I still haven’t been able to retrieve it.

Sound has always played an important role in the Zelda franchise, as it has given us some of the most most memorable videogame-tunes in existence and just having great audio in every game. This one is no different. There aren’t all that many new instant classics, but there is always the right melody, the right background sounds playing for the right mood and all the new songs are great pieces regardless of their catchiness. There are some more voice-samples in this game than previously, I think, but it still doesn’t go above or beyond mumbling and screaming. To me, that is how it’s supposed to be in the Zelda series.

The Legend of Zelda – Skyward Sword requires Wiimotion Plus, which I got through the Skyward Sword Limited Edition Pack, but if you already have 4 Wiimotes or don’t want this awesome, golden, Zelda-themed controller, that is kind of a bummer, but it’s worth it, as the controls work very well. This game doesn’t make any use of the sensor bar. All aiming is calculated through the Motion Plus and its works superbly. Since you don’t need the sensor bar you can sit bsaically how- and wherever you want and still aim just fine. If you ever feel like your aim is off you can re-center it, so there really never is any issue with this. The sword swings are also controlled via Wiimotion Plus now, and unlike in Twilight Princess you don’t just waggle the controller and have Link do all the work. This time the direction you swing your Wiimote in directly translates into which way Link swings his sword. This mechanic makes up almost all of the battles in this iteration, as enemies will block certain ways and you will have to swing your sword the right way to actually hurt them. This works really well and most of the time when you fuck up, it’s because you made a mistake, but I did feel like the occasional wrong input was calculated from my swings, which isn’t too bad unless you’re fighting an enemy that heavily punishes you for hitting them the wrong way (FUCK you, Technoblin! Fuck you to hell!). If you make your moves calmly and assess the situation before you flail your arms around like a maniac, you should be able to avoid said frustration. The whole fighting is not straining on the body at all, by the way. I have played all my sessions in multiples of hours an I never felt exhausted in the slightest. 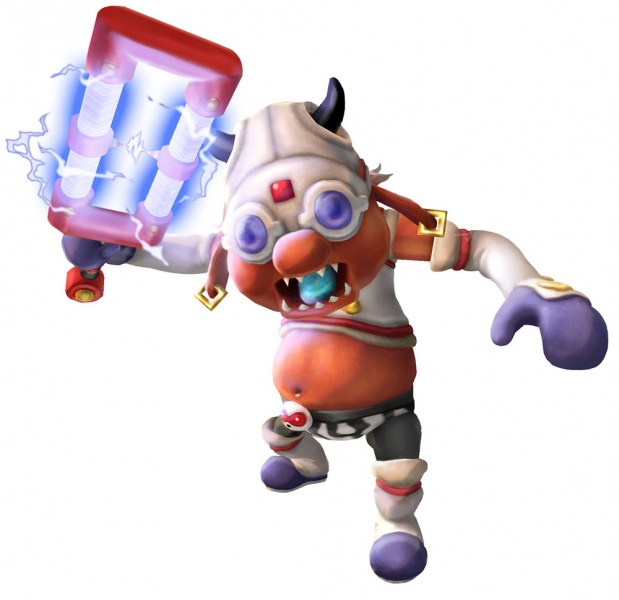 This entry into the Zelda franchise gets rid of the Boomerang for the Beetle, which is a mechanical remote-controlled, winged bug that flies around for you, hits switches, cuts ropes, collects things, grabs bombs and drops them and is a blast to use. There is also the Gust Bellows, which is basically a reverse-vacuum cleaner. It also reintroduces the Whip and the Dual-Clawshot, of which I am still in love with the Dual-Clawshot. As always, some items are rarely used throughout the game. For example I found myself barely using the Slingshot at all once I got the Bow and Arrow and so on, but everything has its use, so feel free to mess around with your favorite items whenever you want. There are lots of collectibles: Materials that can be used to upgrade your other items, bugs that you can use to upgrade potions, Gratitude Crystals which are kind of the Skulltulas of this game, except they involve sidequests much more than mindless searching and the usual pieces of heart.

I wish there was a way to travel faster sometimes, as flying from one island to the other for the 10th time can feel kind of tedious and I wish the game didn’t show me the explanation for everything I collect every time I start playing again after shutting the game down and I wish Fi would stop telling me my batteries are low. I would also have appreciated not fighting that one boss almost 3 times (though the third time ended rather awesomely). Those are relatively minor complaints though when compared to the rest of the game.

The Legend of Zelda – Skyward Sword is an amazing title and a serious contender for best game of the year. It is also a candidate for best 3D Zelda game, though I still feel strongly about Majora’s Mask. The flaws this game has are small enough to overlook them when recommending this game to pretty much anyone and after over 40hours of sheer awesome I’m still Groosin’ for more, if you catch my drift.