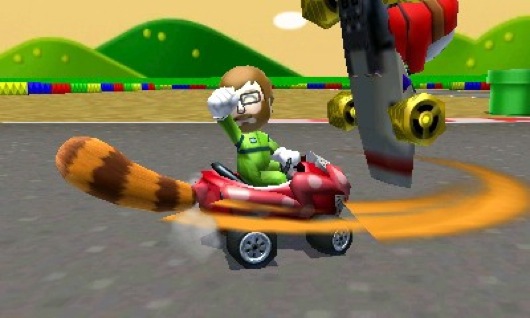 During the press conference that you probably missed, Satoru Iwata of Nintendo presented a bunch of things to come to their 3D portable system.

Let’s start with the firmware update that will be hitting 3DS units in November. Said update will finally enable 3D recording for up to 10 minutes, with the ability to film stop motion and add little effects. It will also add a couple of features to your Mii-stuff, like being able to see where the Miis you’ve encountered are from on a map and transferring data between 3DS systems.  You will also get a sequel to the Mii RPG-thing that can only be played by people who beat the original (not me).

Hulu was also confirmed to become available on the 3DS (and the Wii for that matter) for a 7.99$ monthly fee soon.

In Mario Kart 7 news we have the ability to race with 7 people on- and offline (that’s 8 players in total for those of you who failed elementary school), StreetPass connectivity collecting “ghost” data of people you cross paths with and being able to race against said ghosts on tracks they have completed in order to compare times etc. Also announced were Lakitu and Metal Mario as playable characters, but most importantly there is a raccoon tale item. Now you can enjoy raccoon tales on your karts. All day. Every day.

Also announced were a bunch of eShop games of which most were already known, with one interesting looking one being some sort of samurai adventure that I had not seen before. There should be something for everyone coming up soon on the eShop.

Those are the most noteworthy tidbits of Iwata standing in front of a white background with video accompanying him on the side.