Wayforward released their latest downloadable on the Nintendo 3DS not too long ago. Let me tell you about it.. IN THE NAME OF THE LAW!

As Officer Patricia Wagon, a cute police woman in a robo-suit with a blaster and an alarm light on your head your goal is to capture the recently escaped criminals, who just all happen to be adorable cuties. You can run, jump, shoot and “switch”. As switching is the name of the game (quite literally) Mighty witch Force is centered mostly around puzzles that make use of that mechanic. When you use the switch ability, transparent blocks manifest in the world and others become transparent. Manifested blocks you can stand on, they act as walls as well and so on. There are other kinds of blocks though, for example a kind which shoots you in a given direction if you manifest it while you’re “inside” of it, whereas normal blocks hurt you (or enemies) if you do so. Your abilities you have to find and collect the ladies in striped clothing and then meet up with your big robot friend who transports you to the next level.

Never once during the game is there an explanation of how something works, the levels are designed in such a smart way that you will naturally pick up any and all required skills through clever placement of enemies, blocks and what else you might need to learn about. This is what game design needs to look like in more games! It strongly reminds me of a certain video about game design by egoraptor. In a very good way. Seriously game designers, take some notes!

The graphics are pretty great. It’s the adorable, very high quality sprite work we are used to from WayForward, just with a bit higher resolution than what they did on the original DS. The designs are cute and everything is clearly visible etc. The 3D effect puts some depth into the 2D world and looks neat but is completely optional. WayForward once again employed Jake Kaufman to compose the soundtrack for this game and, as expected, it is amazing. The tunes are catchy, they have a modern-ish touch and are just great pieces of music that I sure as butt enjoyed listening to (and still do). You can actually get the complete soundtrack plus some bonus songs for any price you like right here.

So what is there to dislike about this game? Sadly there is one pretty big thing: The game’s length. There are 16 stages and they all range at about 5 minutes or less to finish. You will naturally fail sometimes, which increases the time you’ll spend with the stage, but it doesn’t do all that much to prolong the experience. There are “par” times you might want to beat, which is pretty dang tough by the way, but I didn’t feel quite so inclined to do so. Luckily, Mighty Switch Force is only 6€ (and I’m guessing 6$ in America), so I never felt bad about buying it. 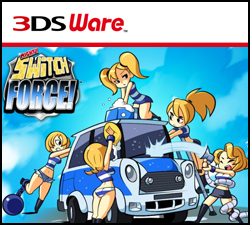 Mighty Switch Force is an awesome puzzle-platformer that does just about everything right. It’s just so immensely short that a lot of people will be put off by it. If you don’t mind spending 6 bucks for a short but awesome ride, please get this game. If not; you’re missing out but I can’t blame you.